During Q3, the Federal Reserve and other central banks eased monetary policy in an effort to counter flagging global-growth momentum. However, further escalation of the US-China trade conflict continued to weigh on confidence, and it remains unclear whether monetary easing alone is sufficient to catalyze economic acceleration.

The global business cycle continues to mature, with the US and most major economies in the late-cycle phase. Sagging trade and industrial activity continued to weigh on global growth, with the share of major countries with expanding manufacturing sectors dropping to its lowest level since 2012. For the first time in the past decade, China's stimulus measures and manufacturing upswing have failed to lift global trade and industrial activity. 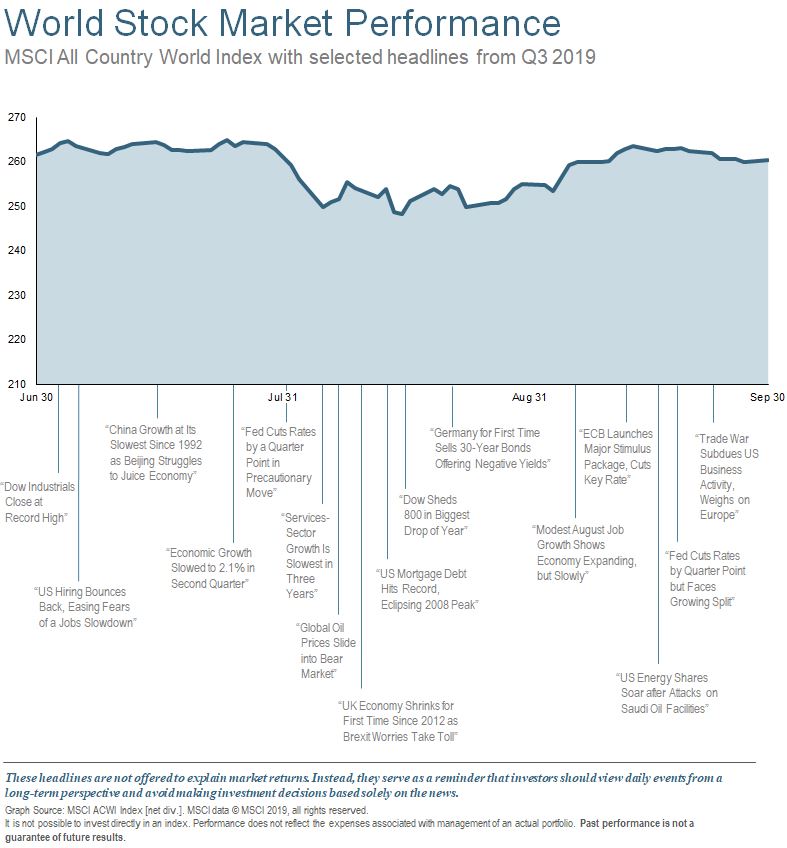 The US is firmly in the late-cycle phase, but the economy remains supported by consumption, which represents around 70% of GDP. Historically, consumer spending and employment growth stay positive during the late-cycle, typically not falling until the onset of recession. Several leading indicators suggest the labor market is nearing peak levels, including consumersâ€™ extremely favorable assessment of the job market, which tends to be most elevated just prior to recession.

Ten-year US Treasury yields dropped due to a decline in both inflation expectations and real interest rates, with both measures decreasing to near multi-year lows. Yields on 10-year Treasury bonds remained below 3-month Treasury bonds, keeping the yield curve inverted. Curve inversions have preceded the last seven recessions and may be interpreted as the market signaling weaker expectations relative to current conditions.

Manufacturing companies continue to struggle on a global basis. Nineteen of the twenty largest industrial countries were in a manufacturing expansion during April of last year, now that number has fallen to only five out of twenty. 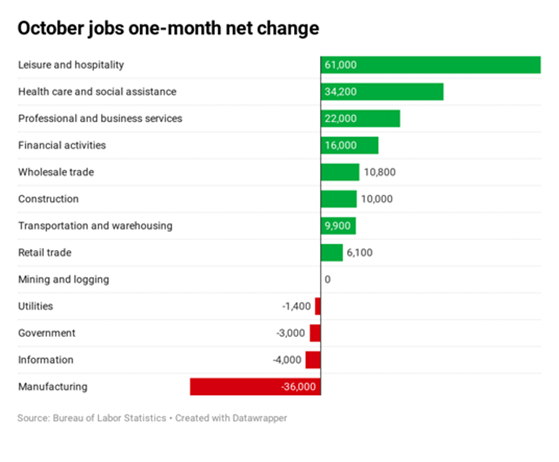 Manufacturing performance could impact the 2020 presidential election. The potential impact is illustrated in the chart to the right. As the saying goes, people often vote based on their pocketbooks. President Trump will likely seek to reverse the job loss trend in some key battleground states. If for this and/or other reasons, he is displaced, it may not only shift the presidency but tax policy. In our view the corporate tax reductions have played a role in helping the US market maintain itâ€™s high valuation, so a change toward increased taxes, as many presidential candidates are advocating, could impact the market negatively. Due to the growing US deficit and future Social Security commitments, increased taxes may be inevitable even without a potential increase in social programs, but this change could continue to be delayed for an extended amount of time. 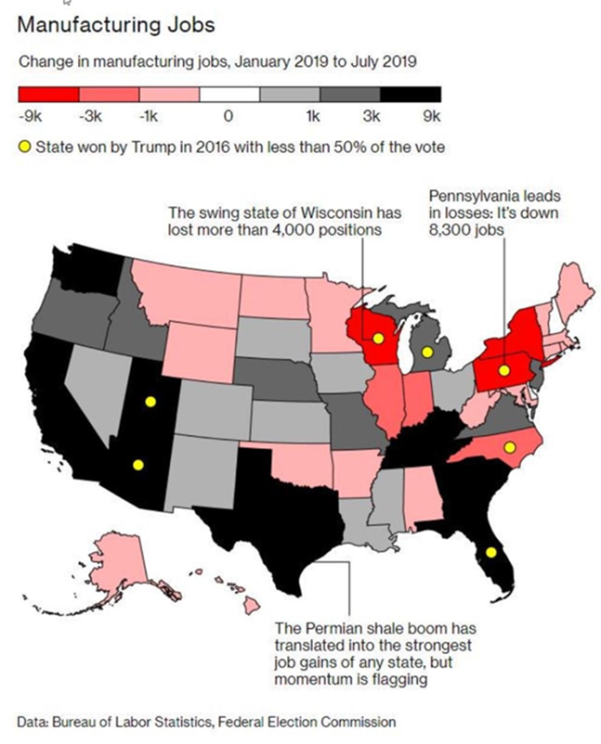 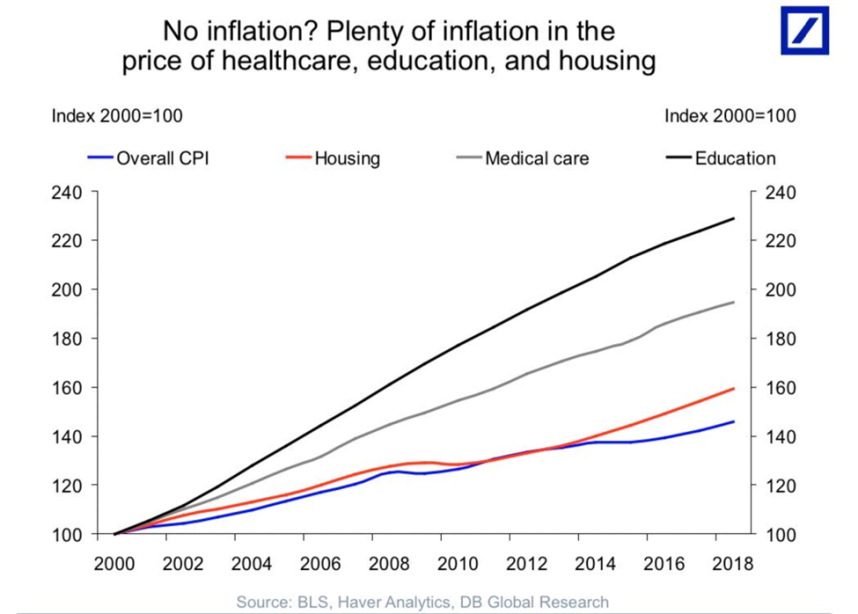 Our present challenge is navigating a market landscape where the valuation disparity between companies and countries is significant. We spent much of the last letter discussing this topic.

The most similar market environment to the current landscape in recent history was during the technology stocks expansion around the year 2000. During that time technology companies were valued much higher than virtually all other sectors. This similarity gives us pause, but if the end result is eventually also similar, portions of the markets which are reasonably priced will be solid investments over the next ten years. Normally if markets decline, the less expensive stocks decline less, but they still decline. The challenge is in separating the wheat and the chaff. There are also market similarities to the nifty fifty expansion of the early 1970s. That was also a time where stable growth companies reached valuations much greater than their peers and then had to eventually correct. The above chart provides some perspective on the relative valuations of stable growth companies in todayâ€™s markets. 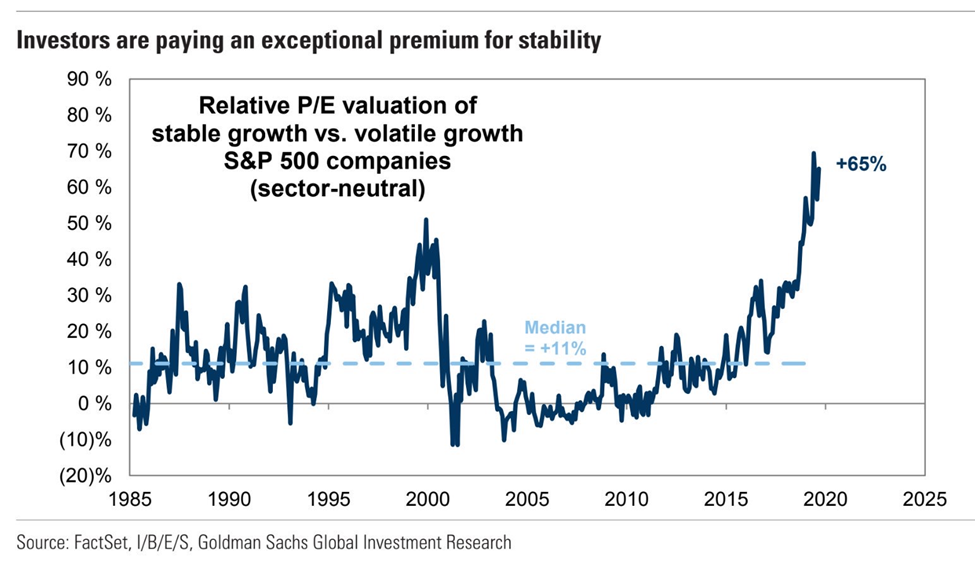 Many measures of US stock market valuation continue to indicate the market is very expensive. An example is the following chart of the US Market Capitalization to Gross Domestic Product. The only example of valuations exceeding current levels in modern history is the market top of 1999. But it should be noted that valuations were extreme in 1998, well before the top, and this did not stop the market from becoming even more expensive. Valuation tends to be a poor timing tool but does give an indication of the amount of risk in the market. Another way of saying this is that valuation doesnâ€™t matter until something goes wrong, then it really matters. Current levels of valuation suggest risk is elevated, and future returns in the US markets will be challenged. 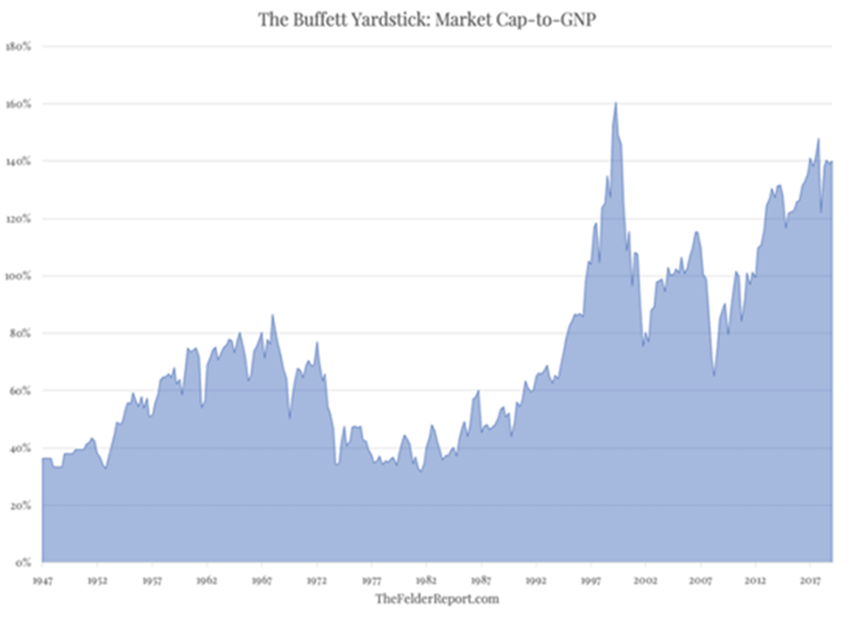 Historically, our Risk Managed Strategy has utilized broad market indexes, and we have been willing to sell and hold cash based on valuations and the market trend. However, now that the divergence in growth versus value has become so compelling, we are beginning to actively build positions in companies and sectors, which are, in some cases, at or near historically low valuations when compared to the market as a whole. We are achieving this shift by investing in a combination of both individual stocks that are trading at attractive valuations relative to the overall market, as well as two actively-managed, value-oriented mutual funds. The broad indexes will still retain a place in your portfolio, but we are not adding to traditional capitalization-weighted indices that are weighted heavily toward the largest stocks. In our view, many of the largest stocks are the most expensive.

The manufacturing contraction has continued and along with current US market valuations, gives us some pause when navigating the current investment environment. The broad US market has remained resilient, but many sectors and countries have declined, creating opportunities. We have proceeded with caution for an extended time, but we now expect to steadily rotate toward value in our investments.

In case you havenâ€™t heard already, it was announced last week that the holding company of Progressive Savings Bank, our parent company, is being acquired by SmartFinancial and merged into SmartBank. SmartBank is a $4.3 billion, publicly traded (SMBK) bank with headquarters in Knoxville, Tennessee. We believe this is an excellent transaction that will be beneficial to the customers, employees, and shareholders of Progressive. As for us, we will remain independent, shift back to private ownership, and continue to serve you the best way we know how, as your fiduciary. Weâ€™ve included the press release with this package to provide greater detail.