During Q2, the US-China trade tension escalated, providing an additional source of concern about the global growth slowdown. The world‚Äôs major central banks, acknowledging the weak global backdrop, shifted their tone more clearly toward an easing bias. These factors stoked volatility in global equity markets, while government bond yields dropped further. Safe-haven assets such as government bonds and gold were the best performers during Q2, while equities and riskier bond categories extended their year-to-date gains.

Global growth momentum continued to slow, and most major economies have progressed toward more advanced stages of the business cycle. The synchronized deceleration in global industrial production continued unabated, with the share of major countries with expanding manufacturing orders dropping below 50% for the first time since 2015. Global trade growth also moved into recessionary territory, weighed down by both the manufacturing slowdown and trade-policy friction, particularly between the US and China. Policy stimulus continued to stabilize China‚Äôs economy. 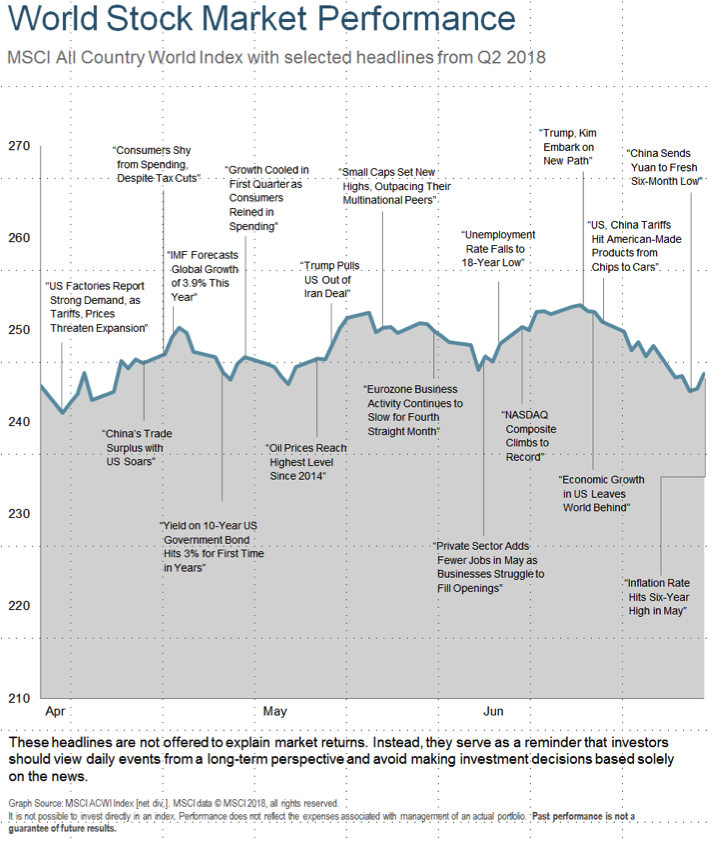 The US is firmly in the late-cycle of economic expansion. While a strong labor market and higher wages have buoyed US consumer confidence, the present large gap between current conditions and forward expectations has often occurred toward the end of prior economic cycles. Furthermore, the improvement in wage growth over the past 2 to 3 years has stalled in recent months despite a cyclically low unemployment rate and continued job gains.

The decline in the real cost of borrowing reflected end-of-Q2 market expectations that the Federal Reserve will cut interest rates at least 50 basis points during 2019. Ten-year Treasury bond yields ended the quarter below 3-month Treasuries, inverting the yield curve. Curve inversions have preceded the past 7 recessions and may be interpreted as a market signal of weaker expectations relative to current conditions. However, the time between inversion and recession has varied significantly, and there have been 2 "head fakes" in which the expansion continued for more than 2 years.

Even though more slowly, the US economy continues to grow, and the current expansion is the longest in our history. Second-quarter GDP growth exceeded forecasts, and consumer spending rose sharply. These are not statements typically associated with a rate cut, but we live in interesting times. So, regardless of the strength of the US economy, the Federal Reserve‚Äôs Board of Governors chose to cut short-term interest rates at their meeting this month. Their commitment to ‚Äúuse every tool at their disposable to maintain the expansion‚Äú was the key to the stock market‚Äôs turnaround in December. Now, they have made a ‚Äúmide-cycle adjustment‚Äù in an attempt to preemptively inoculate the US economy from the slow down spreading across most of the world.

The language of ‚Äúextend the economic expansion‚Äù is a significant departure from historical actions and their Congressional mandate to pursue ‚Äúfull employment and price stability.‚Äù Economies normally expand until goods are in oversupply, and then there is a contraction. The Fed uses interest rate policy to cushion the inevitable contraction by spurring the economy. While we can‚Äôt know exactly what is driving the Fed to action at this moment, it seems possible that seeking to extend the cycle may also risk setting up a larger future contraction.

The Tale of Two Markets

In spite of stretched valuations, most major indices of large US companies continue to grind higher along with the economy. A contributing factor is an unintended consequence of the low-interest rate policy by the Federal Reserve and the corporate tax cuts. The largest corporations are able to borrow cheaply and buy back their own stock. As the following chart illustrates, a few mega-cap tech stocks have generated a dominate portion of the S&P return thus far this year. 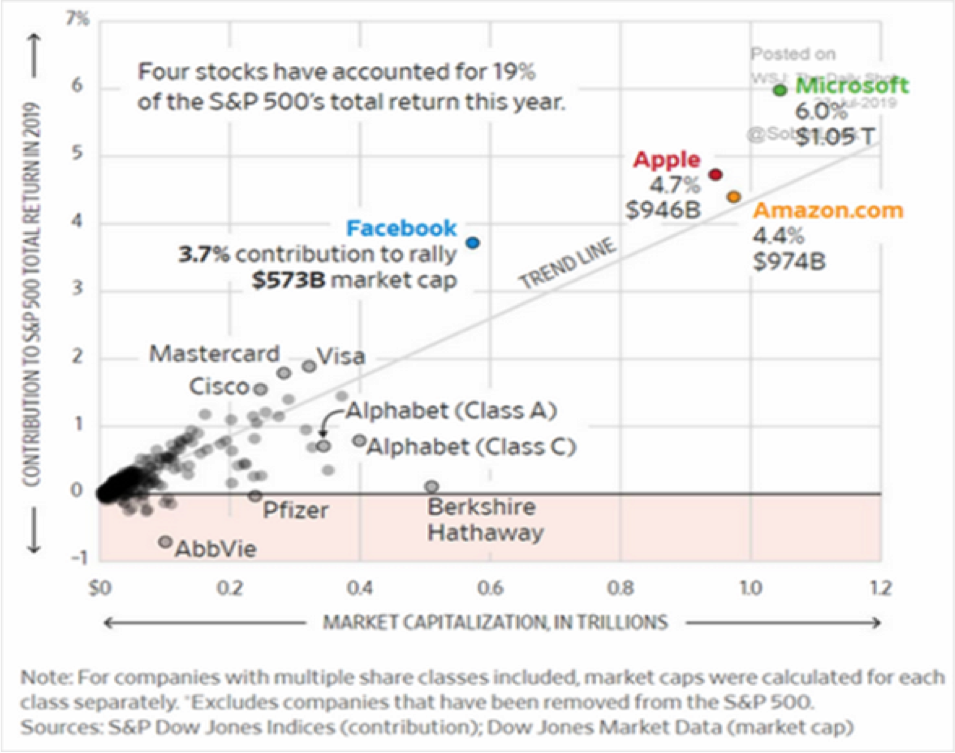 However, upon closer review, we generally find there to be two very different markets at the present time. One, consisting of large growth companies whose price and valuations seem to know no limit (which reminds us of the highs of the year 2000), and the other, which is much bigger, consisting of large slower-growing companies, small companies, and foreign companies. Unlike the S&P 500 index and some of its largest components, the second group is struggling to regain previous highs or even setting new lows. In fact, as noted in the following chart, the total return for value versus growth across developed markets has dropped to its lowest point since the dot-com bubble. 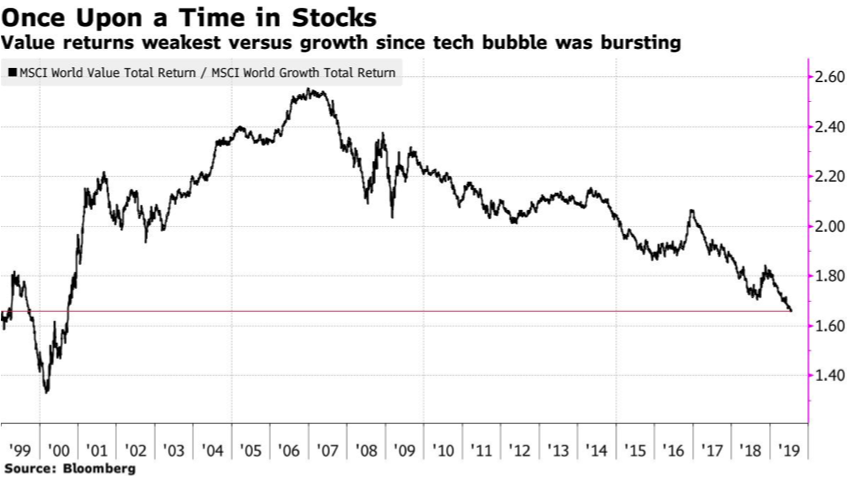 Are there really only a few great companies, deserving of the flood of investment stemming from the LIRP (low-interest rate policy) environment or is there another reason large growth stocks have outperformed so? A recent report from Bank of America suggests the fear of missing out may be partially to blame. They contend that the fear of being fired for missing the latest rally may be causing many large institutional investors to chase the stocks that have already gone up. So-called momentum stocks, meaning the stocks that have already risen the most in the past 12 months, and are at valuations much higher than the overall market. 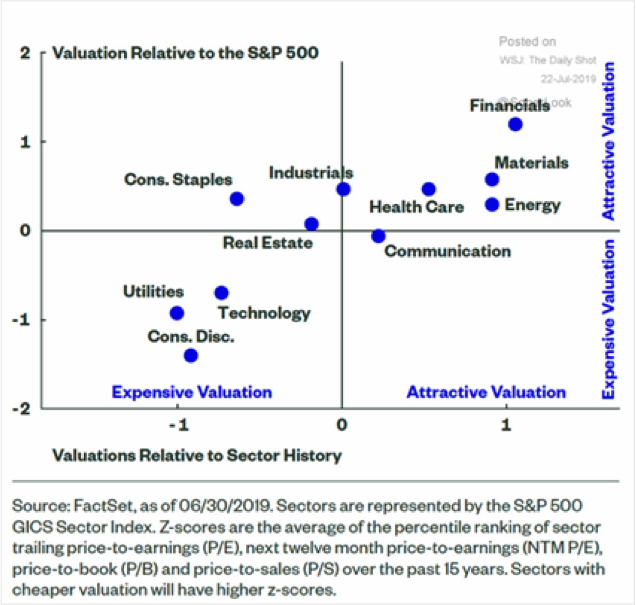 On the other hand, financials, homebuilders, miners, energy, and healthcare have all lagged the overall market and, in some cases, make compelling value arguments. The same could be said for many international companies. Many of these companies are suffering from a perception problem rather than being poorly ran or financially strapped. Recently, JP Morgan strategists declared the current environment represents ‚Äúthe largest relative valuation bubble in modern equity market history‚Äù. Even so, for the market to continue upward, some combination of the small companies, transportation, banking, and energy must participate.  If not, we can expect a correction sooner rather than later and even stocks with better fundamentals won‚Äôt be immune. However, their present position suggests they have an attractive risk/reward proposition and should weather any storm much better than their highly priced/highly valued brethren.

Like ‚Äòevery dog,‚Äô all investments have their day in the sun. Many of the best performers from 1999 to 2007, became become unloved from 2007 to 2019. It may be time for the tide to turn. The weight of the evidence suggests that we proceed with caution, but the gap in performance between the largest US growth companies and most other companies has created some attractive valuations. While we‚Äôre still concerned an unexpected catalyst will trigger a correction, severe market inflections are uncommon. We will always maintain asset type and style diversification and, for now, higher levels of cash.  But, we are also starting to take positions in broad areas and specific companies whose value proposition is just too strong to deny.

If you have thoughts or questions about any of the information we‚Äôve shared, or on any other subject, please don‚Äôt hesitate to call us. We are grateful you allow us to serve you and your family, and we will continue to make every effort to justify the trust you‚Äôve bestowed on us.