Global equity markets rose in the second quarter of 2017, lifted by upbeat corporate earnings in the United States, Europe, and Japan, as well as encouraging economic data from China. Geopolitical concerns steadily moved to the background during the quarter, which helped buoy European shares and risk assets amid lower energy prices. In late June, however, many markets stumbled when European Central Bank (ECB) President Mario Draghi hinted at an earlier-than-expected end to the ECBâ€™s stimulus measures. 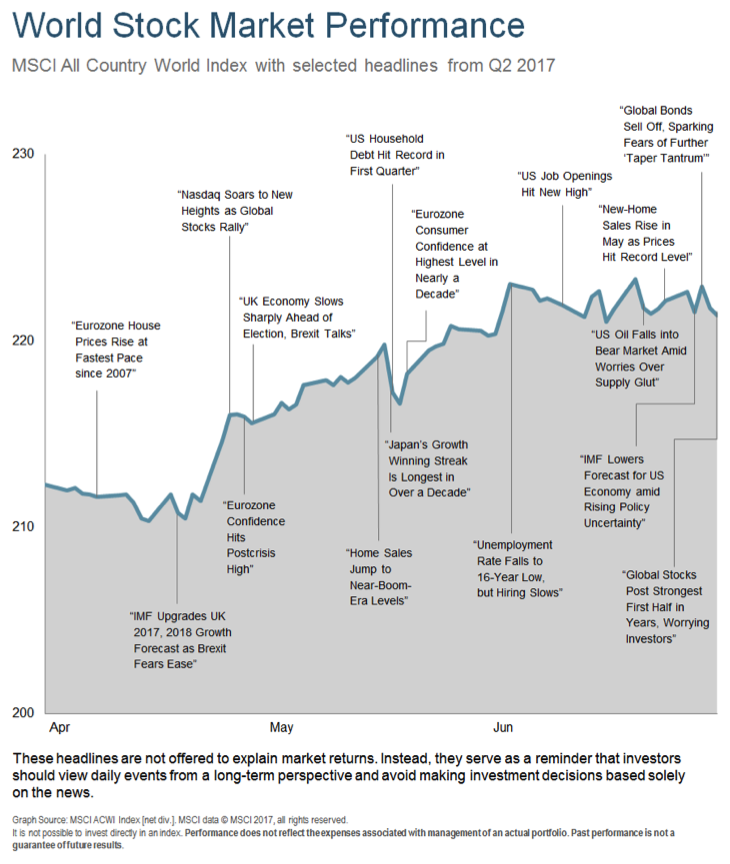 US equity investors were encouraged by generally solid corporate fundamentals and the overall stable domestic economic picture. The US Federal Reserve (Fed) stuck to its 2017 timeline by lifting baseline short-term interest rates by a quarter percentage point in June despite weaker-than-expected inflation data.2  Recent reports showed US first-quarter gross domestic product (GDP) expanded at a 1.4% annualized pace, compared with readings of 2.1% and 3.5% for the previous two-quarters, as consumer spending growth slowed materially.3 On the labor front, the US economy has been adding jobs at a below-consensus pace since winter, even as the unemployment rate fell to a 16-year low of 4.3% in May.4

Equity market volatility remained largely absent during the second quarter despite geopolitical events that included a string of North Korean missile tests, terrorist attacks in Europe, damaging cyber-attacks on unsecured businesses and government institutions, and new uncertainties about Brexit. Markets also appeared to have little reaction to what has become an increasingly challenging path to fiscal policy implementation in Washington, D.C., where delays for key Trump administration initiatives have quieted the popular notion of a â€śTrump tradeâ€ťâ€”the idea that stocks would get a boost from tax cuts, fiscal spending on infrastructure and other new projects, and deregulation. On the upside, global exports were in recovery, having risen through the first five months of 2017 after two years of continuous decline.5 Another market stimulant was lower oil and other energy prices, which have been providing an impetus to the US and global economy by lowering energy costs.

Although various political concerns dampened European equity bourses for much of April, the remainder of the quarter saw markets shrug off politics to focus on economic news. Macronâ€™s victory in the French presidential election and his party taking a majority in parliament solidified positive momentum as upbeat corporate earnings data continued to flow. Following the elections, eurozone business and consumer confidence readings in June reached their highest levels since the global financial crisis. European equity markets collectively advanced, outpacing global equities and other regions.1 The Bank of England held rates steady during the second quarter.6 UK Prime Minister Theresa May called a surprise general election for June that was expected to strengthen her position in parliament but instead resulted in an unanticipated loss of ground for her party, weakening her hand just as the United Kingdom entered the Brexit negotiations.

Stock markets in Asia collectively rose in the second quarter and outperformed global equities as a group.1 Sentiment was lifted in June when MSCI included a small portion of Chinese A-shares in its emerging-market equity index. Although some concerns arose about China regarding regulatory policy and a credit downgrade, many investors appeared to shrug off this news, with Japanese corporate earnings strong and economic data from the major regional economies mostly encouraging.

Latin American stock markets collectively declined in the second quarter, with Brazil and Chile dropping and Mexico and Peru advancing.1 In Brazil, a political scandal surrounding the president erupted in May and hampered stock markets in the country, as well as the region. However, Brazil posted its first quarter of GDP growth following its longest recession on record, which lasted two years.7

The stability of the US economy has surprised many. A sometimes used visual description of the economy is likening it to a battleship. Once a battleship is headed in a direction, itâ€™s not easy to stop the momentum and turn it around. The charts below show how the economic expansion has been long, steady, but also slow. The slowness may provide for an expansion of historical length. It also may mean thereâ€™s room to speed up. 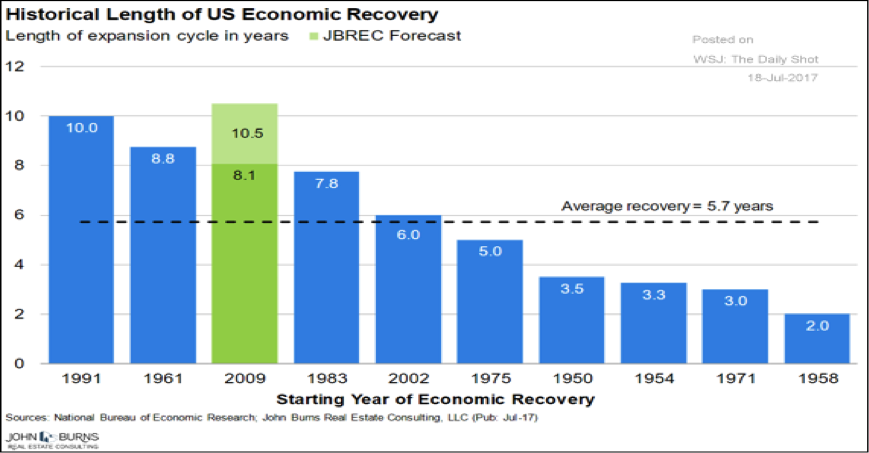 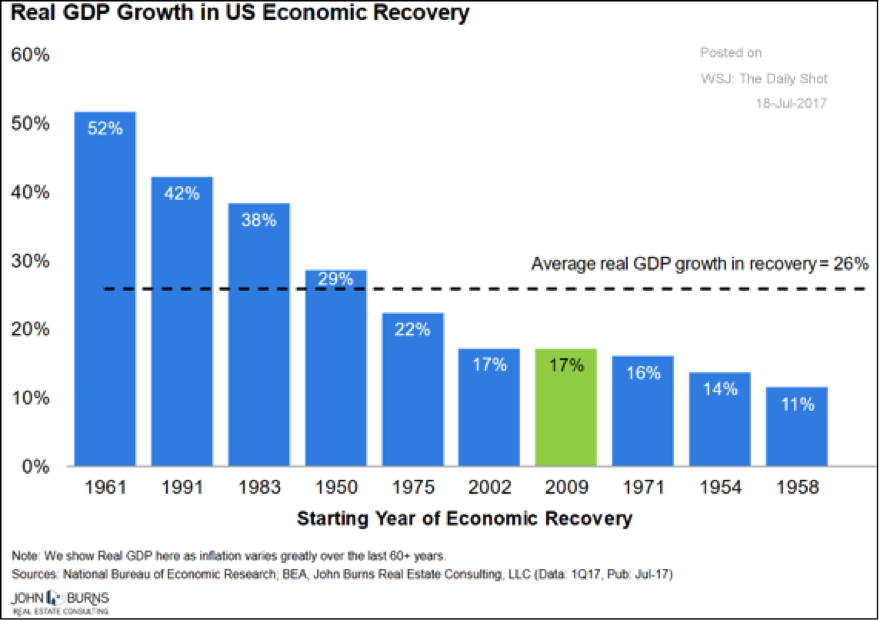 If the economic expansion continues or even speeds up, that lowers the risk of seeing an abnormal market decline but does not rule out a normal bear market of 15% to 20%. Those can seemingly pop up out of nowhere and be due to any one of many reasons. A challenge for investment management in this and potentially less enjoyable markets is helping clients stay diversified. Everyone has a tendency to evaluate a portion of their portfolio and want to sell the â€śloserâ€ť and buy the â€świnner.â€ť This type of assessment is often very dependent on the time frame being considered. What looks like a â€śloserâ€ť at one point in time, likely has looked like a â€świnnerâ€ť in the past. As humans, we tend to evaluate investments based on our own recent experience. As portfolio managers, we seek to look past the moment, and consider what will be the next â€świnner.â€ť To some extent this is unknowable, but to another extent, itâ€™s as simple as the axiom to â€śbuy low and sell high.â€ť Such an approach requires buying or at least not selling some â€ślosersâ€ť and trimming back or selling some â€świnners.â€ť The future is always somewhat different, but over time it is normal for some investments to become overvalued, and some to become undervalued. We continually consider this when managing your portfolio, making adjustments in real time as conditions unfold, and then communicating about the reasoning.

If you have thoughts or questions about any of the information weâ€™ve shared or on any other subject, please donâ€™t hesitate to call us. We are grateful you allow us to serve you and your family and we will continue to make every effort to earn the trust youâ€™ve bestowed on us.

Cravens & Company Advisors, LLC is a wholly-owned subsidiary of Progressive Savings Bank. Investing involves risk including the potential loss of principal. Investing involves risk including the potential loss of principal. International investing involves additional risks including risks associated with foreign currency, limited liquidity, government regulation, and the possibility of substantial volatility due to adverse political, economic and other developments. The two main risks associated with fixed income investing are interest rate and credit risk. Typically, when interest rates rise, there is a corresponding decline in the market value of bonds. Credit risks refer to the possibility that the issuer of the bond will not be able to make principal and interest payments. Investments in commodities may entail significant risks and can be significantly affected by events such as variations in the commodities markets, weather, disease, embargoes, international, political, and economic developments, the success of exploration projects, tax, and other government regulations, as well as other factors. No investment strategy can guarantee a profit or protect against loss in periods of declining values. Past performance is no guarantee of future results. Please note that individual situations can vary.  Therefore, the information presented here should only be relied upon when coordinated with individual professional advice. Any opinions or forecasts contained herein reflect the subjective judgments and assumptions of the authors only and do not necessarily reflect the views of FSC Securities Corporation. There can be no assurance that developments will transpire as forecasted and actual results will be different. Data and analysis do not represent the actual or expected future performance of any investment product.